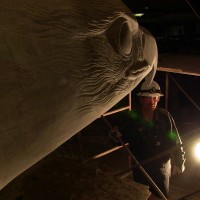 Jeremy Dean Russell was born on June 12th 1969 in Pueblo, Colorado to Benjamin E. and Carol A. Russell. The newest addition to a creative family, he is the youngest out of five children. From the time he started walking he had an uncanny ability to build things out of household items such as toy trucks from cardboard, toilet paper rolls, and ceran wrap. His creative talents were largely encouraged, and as he grew they expanded into drawing, painting, and music. He had a normal childhood up until he lost his mother to cancer on March, 24th 1984. He was 13 years old and lost. From here it gets complicated. Due to a car accident Jeremy, suffered on July, 14th 1996 he lost most of his memory from the age of 13 to the time of the accident from a skull fracture which resulted in a closed head injury. He consequently in addition suffered massive internal injuries, a shattered pelvis, a broken back among many other fractures, and had a large shard of steel go through his right leg. Jeremy, at the scene had bled to death and it was touch and go all the way to the nearest hospital. Somehow, by the grace of God, the surgeons were able to scrape Jeremy, off the gurney and mend him back together. After many months of healing Jeremy, was slowly recovering, but an unfortunate complication arose. It was time for the pins to be removed from his right leg. When the doctor pulled the pins out, he introduced a methicillin resistant staphylococcus aurous, into Jeremy’s femur, which created a condition, called osteomyelitis, a very hard to treat bone infection. After 20, some different debridements and an antibiotic that was causing him to go deaf he had the choice between his hearing and a chance to keep his leg. By that time, however it was too late and the leg had to be amputated above the knee before it could kill him.
Before the accident sources say that Jeremy, dealt with overwhelming depression and tried to take his own life many times. He lived in the fast lane, and had little or no respect for life. Jeremy believes that the accident represented a good swift kick in the butt and that somehow it changed him into a better person. After years of recovery, it was time for him to take advantage of his new lease on life. All though his high school and college education were lost in the accident Jeremy, found a way to adapt. He found that his talents were still mostly intact and was anxious to put them to use. He taught himself how to play guitar all over again and joined a band, but something was still missing. An outlet for visual art…Then one day an old friend happened by. He was someone who attended high school with Jeremy, who he could not remember. He showed Jeremy an old photo album with them in it and helped Jeremy to fill in some of his past. His newly found old friend knew that Jeremy had many natural talents and needed some help to make stone samples he was marketing for a quarry owner polished and crafted. He gave Jeremy a chunk of rock and left him alone with it. Jeremy, carved the rock into a small bear, and from that bear, he received a commission to carve a larger piece. This was Jeremy’s first attempt at sculpting a major work. Two months later, he had created a masterpiece and called it “An Eagles Dream”. The quarry owner saw Jeremy’s natural ability to carve stone and invited him up to his quarry for a visit. The quarry owner offered Jeremy, a wall of solid alabaster to carve on, a vision was born “Freedom’s Eagle”, a fifty-foot sculpture of our national bird. It is Jeremy’s intention that this sculpture will represent the cost of freedom. “Freedom’s Eagle” will honor every person who has served in the armed forces, who have protected and sometimes have made the ultimate sacrificefor American freedom. This is what gives Jeremy, the passion and will to press on through the continuing struggles that come with a project of this magnitude. Jeremy has found a way to carve out a new life, and do something for the love of his country.

Jeremy Dean Russell almost died in a car accident 17 years ago. Ironically, the accident set his life in a new direction that ended up saving his life. He found his destiny was to carve a 100-ton sculpture of an eagle inside a 13,000 ft. mountain. This endeavor came with many new lessons. One of the many lessons that he has learned is that freedom is worth fighting for. As he struggles to cut through the red tape that is tougher to cut through than the stone at times, his passion to thank our veterans drives him forward.
I want to make it clear, I am not a veteran, I do not have that honor. I am a humble patriot who is trying to make a difference with the life he has left. My heart tells me to carve this eagle to honor those who sacrifice for our freedom. That is what gives me the passion to carry on. I have found a way to serve my country and that brings me peace.
When complete “Freedom’s Eagle” will have a fifty foot wingspan and will reside 100 feet inside of a mountain, a work in progress started in 2000 after recovering from a near fatal car accident in 1996.It is Jeremy’s intention to thank all who sacrifice to keep us free.

Is This Your Business or Organization?

Contact us today to sign up for a premium listing. Take advantage of having videos, premium business details, Yelp! reviews and even downloads available on your business listing!